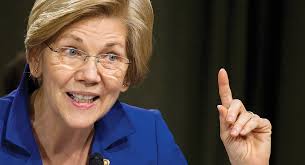 Democratic presidential candidate Elizabeth Warren is making headlines by calling for the elimination of the Electoral College.  As she told an audience in Jacksonville, Miss., a week or so ago: “Well, my view is that every vote matters, and the way we can make that happen is that we can have national voting, and that means get rid of the Electoral College.”  Even more interesting was the response from the racially mixed audience: prolonged and enthusiastic applause.  America’s huddled masses are hungry – not for some shallow reform or other, which no one at this point believes will accomplish a thing, but for fundamental structural change.  They’re sick and tired of an absurd eighteenth-century constitution that hinders them at every turn and are yearning to breathe free.  Plainly, there’s a whiff of revolution in the air.

Otherwise, Warren’s statement can be safely dismissed as one of those games that bourgeois politicians play.  As a former Harvard law prof, she must know that the Electoral College is untouchable under anything like current circumstances.  The reason, of course, is the dysfunctional amending clause in Article V that gives absolute veto power to one-quarter-plus of the fifty states.  When you take the ten low-population states that would see their clout slashed in presidential elections by a half to two-thirds if the EC were abolished and combine them with the dozen or so swing states that would no longer bask in political attention every four years, then it’s clear that opponents would have no trouble winning over the thirteen states needed to stop any such change in its tracks.

To be sure, there’s also the National Popular Vote Interstate Compact, which is being billed as a painless way of bypassing the Article V roadblock.  But it’s hardly a magic solution.  The idea behind it seems simple.  All it requires is that individual states pledge that their “electors” will abide by the popular vote as soon as states comprising a majority of the Electoral College sign on.  Once the 270-vote threshold is attained, the popular vote will be all that matters and the college’s role will be reduced to ratifying the popular will.  But Colorado is the only swing state to climb on board after more than a dozen years, while Rhode Island and Vermont are the only ones among the bottom thirteen of least-populous states.  No Republican states have signed up either since the scheme would almost certainly favor the Democrats.  So while the compact has racked up endorsements from states representing 181 electoral votes so far, it’s highly unlikely to reach 270.

There’s another problem as well.  Contrary to popular belief, the United States does not hold a presidential election every four years.  Rather, it holds fifty separate elections, 51 if you count the District of Columbia, all conducted by local authorities according to various different rules.  As a result, a popular vote in, say, Massachusetts is not the same as one in Florida or North Carolina.  If the national popular vote is to be determinative, the rules will have to be standardized to avoid lumping together apples and oranges.  But if tampering with the Electoral College is likely to run into a buzzsaw of opposition, transferring electoral power from the states to the federal government will run into even more.

The uproar from diehard Republican states is guaranteed to be overwhelming.  Excising the Electoral College is thus doubly or triply doomed.  Like everything else in America’s superannuated constitution – a wildly inequitable Senate, a gerrymandered House, a complicated legislative process that fairly invites gridlock, etc. – it’s effectively unchangeable.  But that’s why the Constitution has lasted for some 230 years: because it’s frozen in place.  Politicians will issue rousing calls for change from time to time, audiences will clap and cheer, and pundits will churn out the usual thumbsuckers demanding that something be done.  But then everyone will go back to sleep.  Lather, rinse, repeat – that’s how constitutional debate works in this country.

Nothing will change – except that something will.  The current situation is untenable.  Yes, even though the EC has overridden the popular vote two times out of the last five elections, the country may dodge a bullet in 2020, in 2024, or after.  Eyelids will once again droop as memories of 2016 fade.  But the damage will not go away.  The longer Americans surrender before such problems, the more they underscore their own impotence, and the deeper they will allow the rot to go.

There’s an interesting parallel here with the United Kingdom.  The U.S. Constitution and the centralized “Westminster” system are really just two branches of the same Anglo-American tree, ones that began diverging at some point in the mid-eighteenth century.  The British system may have seemed more efficient in the years since. But with its monarchy, House of Lords, and attendant class system, it’s just as hidebound and decrepit as the American branch, with voting inequities that are just as pronounced.  With its 55 electoral votes, for example, California gets one vote for every 539,079 citizens within the voting age, while Wyoming, with three electoral votes, gets for every 148,610.  That’s a ratio of 3.6 to one.  But the Isle of Wight sends the same number of people to Parliament, i.e. one, as the Island of Lewis and Harris in the extreme north even though it’s voting-age population is five times greater (i.e. 110,697 vs. 21,769).  The anomaly has led to two 2016-style election upsets in the last seventy years or so, one in 1951 and another in February 1974.  But instead of fixing it, British politicians have allowed it to fester.

Could this deep political passivity be part of the reason that Britain is now stumbling over a cliff thanks to Brexit?  More on that anon.