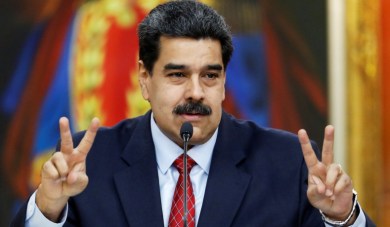 Garry Leech, a journalist, author, and academic, raised an interesting question in Counterpunch the other day, one that, unfortunately, he didn’t pursue quite far enough.  Since the Trump administration has decided to intervene in Venezuelan politics by recognizing Juan Guaidó as president, Leech wondered, then why shouldn’t he intervene in American politics by proclaiming himself president of the US?  One hardly seems more arbitrary than the other, legally speaking.   So if millions of American long to free themselves of Trump, why not take Leech up on his offer?

Leech was being satirical, but for the moment let’s take him at his word.  What’s wrong with his proposal?  For most Americans, the answer is easy: it’s contrary to the law.  Since it’s up to the Electoral College to choose a president, the fact that Leech didn’t wrack up a single electoral vote as far as anyone knows means that he doesn’t qualify.  If he tries to force his way into the White House, guards will regard him as an illegal intruder and respond accordingly.

But how do we know it’s up to the Electoral College?  The answer is that the Constitution says as much in Article II, section one, which deals with how presidents are to be chosen.  And how do we know that the Constitution is determinative, as the lawyers say?  Because it declares itself in Article VI to be “the supreme law of the land.”  The reason that Donald Trump is president and Garry Leech is not, in other words, is because a 230-year-old piece of parchment says so.

But what if Leech fetches another piece of parchment and writes on it that he hereby grants himself full authority to appoint himself commander-in-chief?  If so, we would have two competing documents, each claiming to be the final word.  Needless to say, constitutional experts would point out that since Leech wrote his document himself, it reflects nothing more than the whim of a single individual whereas the Constitution rests on the authority of an entire nation, i.e. “we the people” who ordained and established it.

But there’s a problem here, which is that the meaning of “we the people” has changed over the centuries.  In 1787, it meant white male property owners, virtually the only people allowed to participate in elections for the special state ratification conventions called to approve the proposed new plan of government.  This hardly qualifies as democratic by modern standards, while the fact that an estimated 160,000 people voted out of a total population of 3.9 million renders it less impressive still.[1]

So “we the people” did not ratify the Constitution in a way that we now regard as meaningful.  While conceding that the original ratification process was flawed, the same experts might reply that Americans have since demonstrated their support by living and dying for the Constitution and governing themselves according to its precepts.  But this concept of an on-going de-facto ratification doesn’t add up since we can’t be sure if Americans have approved of the Constitution all these years or merely acceded to it.  The only way to be certain is to put it to a formal vote.  But the Constitution makes no provision for an up or down vote on the entire document, so the courts would almost certainly intervene were Congress to allocate money for any such purpose.

So we’re stuck with a Constitution that blocks the only sure way of determining if it still enjoys a measure of democratic support.  In the final analysis, this means that the only authority it rests on is its own.  We obey the Constitution because it tells us to, and it tells us to because it’s the Constitution.  Ultimately, this is no better than a scrap of paper bearing the words, “I do hereby appoint myself president with all the rights and privileges thereof.”  It’s self-justifying, circular, and hence meaningless.

This is not word play, but a problem that goes to the heart of America’s growing political troubles.  The crisis facing the US today is one of legitimacy, which is to say the right to rule.  Trump lost the 2016 election by 2.8 million votes, yet slipped into office by virtue of an obscure constitutional provision that Americans had long regarded as a dead letter.  This is the second time this has happened in less than two decades, yet it’s likely to occur more and more as state population discrepancies widen and the Electoral College grows increasingly unrepresentative.  Yet thanks to an amending clause that is even more dysfunctional, there’s nothing Americans can do.  Supposedly, “we the people” are sovereign, meaning that we can do anything we think necessary to “establish justice, insure domestic tranquility, provide for the common defense,” and so forth.  Yet we’re powerless to repair an obvious defect that represents a growing danger to democracy.

This is absurd, but not unique.  In fact, it’s merely an extreme version of a malady affecting virtually every liberal democracy on earth.  All pay lip service to popular sovereignty, yet all set rules concerning how far popular sovereignty can go.  As a result, governments have spent the last few decades busily locking citizens up in huge international structures that are effectively beyond their control.  The European Union is the most glaring example, but others include the IMF, the World Bank, the World Trade Organization, and even the UN, all of which can make or break entire societies yet are subject to only the most indirect forms of democratic governance.  As Brexit demonstrates, the people cannot rebel against this unjust arrangement without suffering grievous consequences.  So their only option is to submit or strike out on their own and no doubt fare even worse.

It’s a Hobson’s choice if ever there was one.  To be sure, Britons voted better than two to one in a 1973 referendum to remain in the European Economic Community, the precursor of the EU.  But no one knew at the time there would be no way out.  Arguably, this wouldn’t have mattered if the EU were more democratic.  But it’s not, which is why the current situation is increasingly unsustainable.

What is to be done?  As far as the US is concerned, the options seem clear.  Since the Constitution is unchangeable, the only way out is to impose change from without by smashing through the legal constraints and establishing government on the basis of new laws that the people would then establish to justify their rule.  This means retroactively legalizing their own illegal act, a prerogative that only a supra-legal sovereign enjoys.  If this sounds dangerously radical, bear in mind that the founders did the same in 1787 when they declared in Article VII that the new plan of government would go into effect according to rules that were contrary to the existing law of the land.  (Where the Articles of Confederation, adopted in 1783 and still in effect, said that any constitutional change must be approved by all thirteen states, the new Constitution announced in Article VII that it would be considered ratified when approved by just nine.)

The same goes for Europe.  Instead of a Rube Goldberg-style governing apparatus consisting of a European Parliament, a European Commission, two European councils, plus who knows how many other bodies, Europeans must put an end to such absurdities and – led by the working class – reorganize the continent on a completely new and democratic basis.

No one knows how it will be done, whether via a general strike, workers’ councils, a constituent assembly, or some combination of all three.  But the more society buckles under the weight of the post-2008 economic slowdown, the more a showdown looms.  Revolution is crazy, far-fetched, fantastic — and unavoidable.