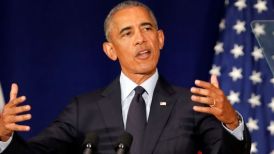 Barack Obama’s September 7 speech at Urbana-Champaign has gotten a lot of attention due to its anti-Trump rhetoric.   But one comment has gone largely ignored:

And, by the way, the claim that everything will turn out OK because there are people inside the White House who secretly aren’t following the president’s orders, that is not a check.  I’m being serious here.  That’s not how our democracy’s supposed to work.  These people aren’t elected.  They’re not accountable.  They’re not doing us a service by actively promoting ninety percent of the crazy stuff that’s coming out of this White House and then saying, don’t worry, we’re preventing the other ten percent.  That’s not how things are supposed to work.  This is not normal.  These are extraordinary times.  And they’re dangerous times.

These people aren’t elected.  They’re not accountable.  They’re not doing us a service….  What is this but an attack on the New York Times for publishing an anonymous op-ed by “a senior official in the Trump administration” claiming that Trump appointees are working behind the scenes to block his “more misguided impulses”?

“Although he was elected as a Republican,” the op-ed declares, “the president shows little affinity for ideals long espoused by conservatives: free minds, free markets and free people.”  Instead of confronting Russia, it complains that the president has balked at expelling alleged Russian spies and has opposed sanctions designed to counter to Moscow’s “malign behavior.”  But never fear, “his national security team knew better – such actions had to be taken, to hold Moscow accountable.”  So top officials have rammed them through regardless.  “This isn’t the work of the so-called deep state,” the piece went on. “It’s the work of the steady state.”

This was all quite extraordinary.  Last year, the Times said the notion of a deep state was a lie that Trump made up “to deflect perceived criticism by attacking the legitimacy of the critic.” Now it turns out that a deep-seated anti-administration conspiracy does exist and the Times couldn’t be happier.  In a follow-up editorial, the paper accused Trump of acting unconstitutionally by daring to get upset.  “Finger-pointing, name-calling, wild accusations, cries of treason – it was an unsettling display, not simply of Mr. Trump’s emotional fragility and poor impulse control, but also of his failure to understand the nature of the office he holds, the government he leads and the democracy he has sworn to serve.”

But what’s wrong with letting loose at those trying to do his administration in?  Wouldn’t Obama do the same if self-appointed guardians of the status quo blocked his most important initiatives?  How about Bernie Sanders — wouldn’t he do the same?  Steve Bannon may have exaggerated when he accused the Times of encouraging a coup d’état, but only slightly.  Tanks may not be ringing the White House.  But what the anonymous op-ed describes is essentially a slow-motion putsch in which the permanent national-security apparatus jams up the machinery from within.  These are indeed dangerous times, just as Obama says.

What’s ironic, of course, is that while no one elected such people, it’s not clear who elected Donald Trump.  Certainly, the people didn’t; rather, he slipped into office by virtue of an obscure body known as the Electoral College, the American equivalent of the Vatican’s College of Cardinals, which overrode the popular vote for the second time in less than two decades.  This is a frankly undemocratic body that triples the clout of depopulated rural states like Wyoming and the Dakotas in presidential elections at the expense of the teeming giants like California and New York.  The Times could have called for repeal on the grounds that it violates the principle of one person-one vote.  But it can’t for the simple reason that it’s impossible.  Thanks to the three-fourths provision in Article V – which says that any amendment must be approved not only by two-thirds of each house of Congress but three-fourths of the states – thirteen states representing as little as 4.4 percent of the population can veto any constitutional reform in perpetuity.  Since rural states can be counted on to use every constitutional trick in the book to protect their special advantage, reform is out of the question from the start.

Conceivably, the Times could admit that America’s decrepit constitutional structure is beyond repair.  But since this would pitch it into terra incognita, it has opted instead for a kind of double denial.  On one hand, it ignores the problem posed by the Electoral College, thereby misleading its readers as to the true nature of America’s constitutional crisis.  On the other, it has placed the blame solely on Trump, who is supposedly wrecking American democracy single-handedly.  It’s not the fault of the Constitution, you see, but of a single aberrant individual who somehow snuck into the Oval Office and is now laying the country waste.

It’s convenient since the effect is to get the Constitution off the hook along with establishment pillars like the Times itself.  The upshot is a nonstop campaign to demonize Trump as the be-all and end-all of America’s sorrows plus an even stranger attempt to portray Vladimir Putin, the man who supposedly put him in office, as an all-powerful puppeteer straight out of the Protocols of the Elders of Zion.  It’s an interesting example of how a bourgeois institution, unable to deal constructively with the problems pressing down upon, responds by retreating ever more deeply into the occult.

In constitutional terms, the effect is to intensify the crisis by promoting plots and conspiracies at home while encouraging military confrontation with a nuclear power abroad.  Republicans and Democrats are both constitutional in the sense that both are products of America’s hyper-attenuated pre-modern structure.  Hence, as this column has repeatedly argued, both are equally complicit in its collapse.