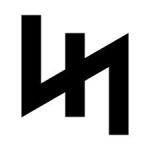 The wolfsangel, the Svoboda Party’s chosen insignia.  If you think this resembles a swastika, you’re obviously a Russian dupe….

I came across a curious article by someone named Alina Polyakova on The New Republic website.  Entitled “Russia Can’t Decide If Ukrainian Jews are Villains or Victims,” it dished up the usual White House-NATO rant about how Putin & Co. are exaggerating the role the Svoboda (Freedom) Party and the Right Sector in the new government of Arseniy Yatsenyuk for propagandistic purposes.  So what if Svoboda originally called itself the Social-National Party of Ukraine in imitation of Hitler’s National Socialists?  So what if it used a modified swastika known as a wolfsangel, or wolf’s hook, as its party insignia?  Ditto party leader Oleh Tyahnybok’s declaration of war against the “Russian-Jewish mafia” allegedly calling the shots in the Ukraine or the torchlight parades party members are fond of holding in honor of the Waffen SS Galicia Division.

None of it matters, according to TNR’s Polyakova, because Svoboda has matured.  Now that it has gotten a taste of power, she writes,

Svoboda has moderated its rhetoric and softened its image. In the interim government, Svoboda members hold three out of twenty positions, and most Ukrainians would no longer call the party “radical.”  Many jokingly call it “white and fluffy”: harmless as a bunny.

As for the Right Sector, the masked street fighters who spearheaded the assault on the former government of Viktor Yanukovych, they are also not the storm troopers they are often made out to be.  According to Polyakova:

The group styles itself as a nationalist organization in the tradition of Stepan Bandera, a polarizing historical figure.  Bandera led a guerrilla army fighting for Ukrainian independence during World War II, but was condemned as a traitor and Nazi collaborator by the Soviet Union.  KGB agents assassinated Bandera in Munich in 1959.  Yet Bandera also spent two years in a Nazi concentration camp, complicating his depiction as a Nazi stooge.  Historical evidence suggests that Bandera and his followers were not programmatic anti-Semites, but rather ruthless militants willing to murder anyone – Jews, Russians, Poles, and even Ukrainians – who stood in the way of their political goals.  In western Ukraine, where Bandera fought his battles, he is now remembered as a hero and freedom fighter.  In the south and east, he is still remembered as a Nazi collaborator.

Since Bandera was something other than a “programmatic” anti-Semite, his sins were of a lesser order.  Since he didn’t launch pogroms against Jews alone but against non-Ukrainians in general, Jews have no more reason to be afraid than, say, Russians (who are in fact up in arms).  So don’t worry, the latter-day Banderites are cute as bunnies while it’s Putin who is the new Hitler.  Just keep repeating: Russians bad, Banderivtsi white, fluffy, and adorable….

What makes this all so amusing, in a ghastly way, is where it appears.  In the bad old days under former editor Martin Peretz, The New Republic was notorious for spying anti-Semites behind every rock and tree.  Peretz was an equal-opportunity paranoid, pointing an accusing finger not just at Arabs and assorted left-leaning Europeans, but at American Jews like The New Yorker’s David Remnick and Rick Hertzberg, mild liberals who gave aid and comfort to the enemy, according to Peretz, by letting slip a mild criticism of the Jewish state.  “[D]espite all the true evil in the world,” Peretz noted darkly in 2011, “the designated target of the chic progressives, including alienated Jews, is the Jewish state.  There are many predecessors of the type in history.”

But that was the old New Republic.  The new New Republic dismisses Svoboda as harmless, argues that the Right Sector’s anti-Semitism is a thing of the past, and describes Stepan Bandera as merely “polarizing.”  (What next — Hitler as “controversial”?)  In a few short years, it has gone from hyper-vigilance over the threat of anti-Semitism to anger at Putin for so much as raising the subject.

Polyakova and her editors are misinformed: Bandera’s anti-Semitism could not have been more “programmatic.”  Dmytro Dontsov, whose ideas inspired the formation of the Organization of Ukrainian Nationalists in 1929, a portion of which Bandera would go on to lead, has been described as “an organic anti-Semite” who translated the anti-Semitic writings of Hitler, Goebbels, and others for the benefit of his fellow militants. Volodymyr Martynets, editor of the OUN’s most important ideological journal, described Jews as “parasitical … morally damaging … corrupting … racially unsuited for miscegenation and assimilation,” while Bandera and his followers issued a general call on the eve of the Nazi invasion of Russia to “combat Jews as supporters of the Muscovite-Bolshevik regime.”  Following the German invasion, Stepan Lenkavskyi, the chief ideologist of the Banderites, urged the physical elimination of Ukrainian Jewry, while Iaroslav Stetsko, prime minister of the new pro-Nazi Ukrainian state, called for “the destruction of the Jews and the expedience of bringing German methods of exterminating Jewry to Ukraine….”  (For more on this, see Pers Anders Rudling, “Anti-semitism and the extreme right in contemporary Ukraine,” in Andrea Mammone, Emmanuel Godin and Brian Jenkins, eds., Mapping the Extreme Right in Contemporary Europe: From Local to Transnational (London: Routledge, 2012), esp. pp. 190-91.)

Not only did Banderivtsi participate in the slaughter of thousands of Jews after June 1941, but they also killed anywhere from 50,000 to 100,000 Poles in an effort to purify the western Ukraine in 1943-44.  While it’s true that the Germans clapped Bandera in prison, they released him in 1944 as they set about creating a special Ukrainian unit of the Waffen SS, the same “Galicia Division” that the Svoboda Party now celebrates.

“The past is never dead,” said Faulkner. “It’s not even past.”  This is why Tyahnybok gave his now-notorious speech in 2004 lauding the Banderites for fighting “against the Muscovites, Germans, Jews, and other scum who wanted to take away our Ukrainian state” and why another Svoboda firebrand, Yuriy Mykhalchyshyn, according to Pers Anders Rudling, described the Holocaust in 2011 as “a bright episode in European civilization.”

So how does one explain TNR’s journey from paranoia to complacency?  Although many leftists see the magazine as little more than a mouthpiece for AIPAC and Tel Aviv, its prime loyalty has always been to the State Department, especially the “neo-liberal” wing of the foreign-policy establishment headed by Al Gore, Hillary Clinton, and now John Kerry.  The Israelis are not as hostile to Putin as one might think, while the Anglo-American liberal media, from the London Review of Books to The New York TImes and TNR, have been far quicker to jump on the hate-Russia bandwagon.  Liberals raised a clamor when Jorg Haider’s Freedom Party entered the Austrian government in 2000 and when the equally far-right Jobbik Party became a major power broker in Hungary as well.  Yet the current attitude with regard to Svoboda and the Right Sector is one of hear, speak, and see no evil.  Thanks to the Internet, information has never been more abundant, yet the punditocracy has never been more timid and conformist.

The United States is a society in acute crisis.  Sure, other countries are too.   But the situation here is particularly advanced due to a variety of factors: imperial overstretch, unparalleled social decay, and a 1787 constitution that has somehow persisted into the 21st century.  The result is a structure as broken as the old Venetian Republic and one that is increasingly destabilizing.  By exploring this growing breakdown, this blog offers a view of US politics you won’t find in The New York Times or the Nation.  But the deeper the disarray, the more important it will become.

Dan Lazare’s books. Click on image to buy at Amazon.com